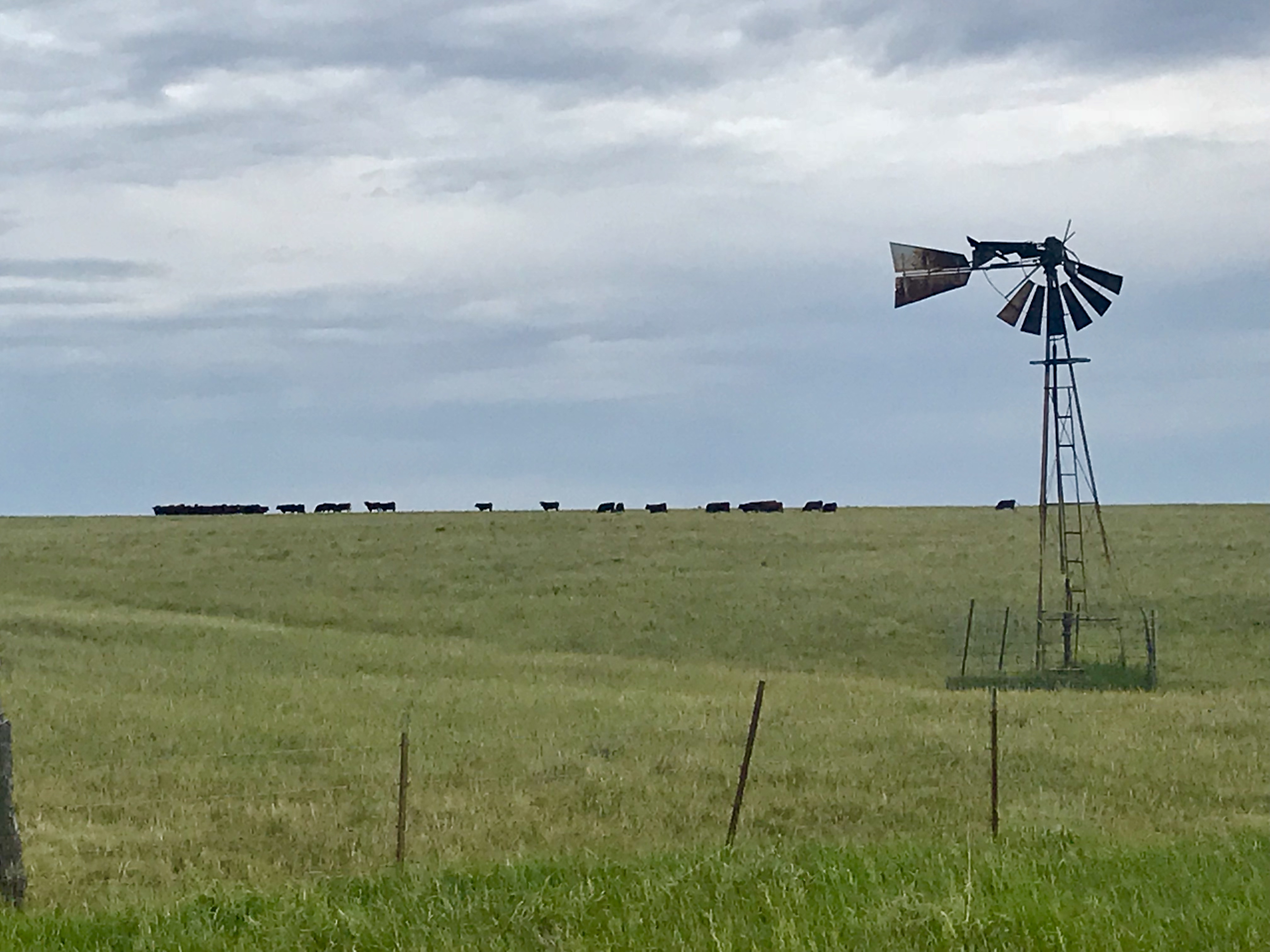 As Dinah Washington, Rod Stewart or Ami Winhouse (depending on your age) might say, ‘What a difference a day makes, 24 little hours’. Yes the Yang returned to equal the Ying of yesterday and life is good again. I was shattered yesterday and to be honest was wondering if I could repeat such a day again today if required. My fears were unfounded and the day turned into a great day, Kansas redeemed itself in my affections and the cruel weather Gods appear to have rewarded us for yesterdays determination and efforts. No winds at all or some small tailwinds sent us off into a beautiful early sunshine. I think due to the excitement of the perfect weather Terry and I teamed up and rode off at a fast pace which we kept up all the way to the SAG at around 30 miles. No effort and riding on or around 18-20 mph.

Trees, I started to see trees and also water under the bridges that cross streams named on signs. Up until today you would only see the odd lonely tree and bridges that crossed dried up depressions that had signs but no water. The large fields here were growing corn, alfalfa and other various crops without the aid of the large watering systems, which signaled a change in the local weather conditions and prosperity of the places we now rode through. One other thing noticeable here are the occasional and large fracking plants dotted all around. They don’t look great and I am not sure what long term effects they might have on this area, however at the moment they seem to be bringing money, work and prosperity to this part of middle America.

So riding along I was reminded of my childhood growing up on a country estate in the Cotswolds, UK. Now before anyone gets the idea I somehow am a descendent of the rich British landed gentry of the UK, I have to tell you one of the worst days of my life was around eight years old when I realized that this beautiful sprawling estate was not ours and that my mother was actually just the cook here. Joking aside it was an idyllic place to grow up and I still remember it with fondness.

It seems funny to compare Kansas with the Cotswolds but I saw enough today to take me back there. Mr and Mrs Fitzgerald were wonderful people and my mother really enjoyed working for them for just over 7 years as their cook. Their three children Peter, Anne and Sarah were often away at boarding schools, so it felt like my brother and I had the run of the place most of the year. I am not sure if it is just fond memories but the days seemed longer back then. School holidays went on for ever. Despite not having other kids around, there were all sorts of adventures to have each and every day. The estate had some large crop fields similar to the ones I saw today and a few wooded areas which surrounded the valley where the main house and five workers cottages were situated. The large main estate house looked out over terraced lawns that led down to a lake, passed a herb and vegetable garden.

I played happily here living out all sorts of fantasies imagined in my head, cowboys being shot and rolling down the terraced lawns to die yet again in front of the lake. Climbing a rope to the treehouse only to then escape the military guards posted all around the sand pit and vegetable patch. We got to ride the ponies and when bigger the well behaved older horses. We didn’t have any money and my mother worked hard but here you didn’t need money, and hard work earned a quality of life that others could never know. The innocence of youth allowed me to enjoy everything this place had to offer. It wasn’t until later I realized where we actually had lived and who my mother really worked for.

One eye opener was when I was at Art college in the mid 80’s. I was studying fashion and design and one of the lessons we had each week was art history. One day our teacher was showing us slides of paintings featuring great or classic costumes painted by the famous artists of the time. Up on the screen came a painting of a lady in blue by Gainsborough. I had seen this painting before. We were told this painting was this, that and the other in terms of art and design, however I knew this picture and could not think why. As the lesson ended I remembered the dining room next to a long  side table. I told the teacher I knew where this private collection picture was and that I had been told off more than a few times for touching it trying to feel the blue painted fabric of the ladies dress. Yes the Gainsborough lady was hanging on the wall of the dining room at Gawcombe.

I am not sure why another story also popped into my head as we rode passed the immature corn fields, large green trees and the odd house or small church. My mother used to play the organ at the small chapel in Westcote every Sunday while we lived on the Gawcombe estate. As I wasn’t the quietest of children always asking questions, looking about or making other distractions, I had to spend Sunday service sat next to my mother on the organ bench seat in range for a quick smack and deadly glare if trouble brewed. On one Sunday the Westcote congregation had a visiting priest/vicar (I’m not sure his title now) who was obviously of some importance to this small village. I was told to behave especially this day and that none compliance was not an option and would result in a red behind. Sat a few feet below the pulpit, behind the organ, looking up at this larger than life man dressed in a white robe talking loudly to a silent congregation, I noticed he had large front teeth. I am sorry but this was and to some extent still is my mind. All I could see now were two large front teeth moving up above me. I am sure I never heard a word from behind the teeth as nothing else mattered to me as a child then. I sat still and stared at the man, which I am sure my mother was grateful for thinking for once I was listening and taking in the weekly message. As this large white figure said something about the children of god, smiled and looked my way, a thought followed quickly by words already escaped from my mouth and not whispered for all to hear, ‘Mum, do horses have toothache?’.

I believe the priest smiled and carried on, I know I didn’t get a good hiding and my mother often spoke fondly of that time many years later, saying she actually understand how and why that question formed itself in a child’s mind. That was me at 5 or 6, inquisitive, innocent and fascinated by the world and people in it. I hope I still retain some of that child from those times as I know I grew up in a world of wonder and adventure. Today as we rode quickly with no effort along a quiet road

in Kansas I felt some of that same free spirited feeling. The grass fields, shaded tree lined hills and dales and sleepy ponds and creeks all screamed adventures, long days and fantasies come to life. The day you think you know everything, the day you stop learning or the day where the world becomes boring or mundane is the day you stop living. If you just look around, stop for a moment or gaze at something with fresh eyes you may find that the world around us is a truly amazing place full of adventure, fun and fascination like it was when I was a child and as it was again today.

After the SAG at 30 miles Terry told me he was meeting his wife today at the hotel later. I think Terry must think the world of his wife, like he should, as I didn’t see him again until I got to the hotel well after him. I had enjoyed my reminiscing of my early years alone though the green and yellow fields, until a couple of miles from home I was joined first by Ken and then the Colonel. Barry with his usual warm smile came alongside and led us the final mile in to the hotel, a nice way to end a great day.

So with just the change of the wind direction I had gone from a tough day to a great day, from a cruel ride to a beautiful ride and from one of my hardest rides to one of my easiest.

What a difference a day makes indeed.